Fundraiser! The large tool painting reproductions from the winter 2021-22 Fake Tool exhibition at Chainlink Gallery Place are now for sale. 50% of all proceeds will go directly to Harvester Arts and the Chainlink gallery. These detailed, high-res images measure 4' x 4', and are printed on exterior-grade vinyl with black mounting grommets. 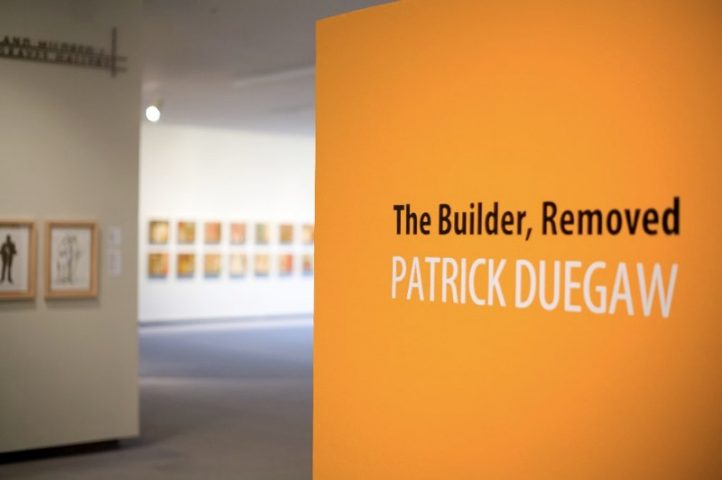 Building and Brokenness: Process as a Re-Negotiation of Meaning

As Francisco de Goya y Lucientes created his “Black Paintings” throughout the 1820s, his subject matter not only engaged with the competing complexities of disconcerting pasts and uncertain futures, but also grew in intensity as a result of altered processes—evidenced clearly by the artist’s oily transfer of the mind’s horrors directly onto the cracking plaster of his home’s walls. While Goya was both inspired and consumed by those looming images within the sanctity of domestic spaces unseen by anyone other than the artist, that is not how we experience them today. Dimmed lighting and basement placement at the Museo del Prado approximate Goya's psychodramatic environments as viewers look at paintings that have since been transferred to canvas, but the framed and institutionalized image is a tamed one, quite removed (literally) from the hurts that initially inspired it. Painting, thus, is an act not simply of working toward, but working through--a multilayered, meta-institutional process that impacts differently on artist, technique, artwork, environment, viewer, and history. Patrick Duegaw's contemporary riff recasts the artist as the one who must salvage and reassemble fragments of everydayness and exceptionality--hammering, gluing, and bolting representations of forgotten moments, odd gestures, quirky statements, and blasé situations into a theater of the imagination where such combinations are not only possible but celebrated. Duegaw's “characters” are drawn from his own living space, family, and community; importantly, they reflect identities that may not be accepted or universally understood by the masses, but, instead, dwell in various states of unconventionality--from pseudo-ruffian biker to Wal-Mart manageress to artistic bohemian to self-confessed pyromaniac. Their faces are those we encounter every day, but their desires, the experiences to which they gravitate, and the ways they envision themselves and their relationships to others are often unsettling—ultimately turning the critical lens back upon and exposing viewers' latent prejudices, fears, and worries. What Duegaw refers to as “static theater productions,” the assemblage-like paintings constantly lend themselves to new arrangements and considerations, forming constellations of attraction, repulsion, intrigue, and banality that the artist may change again and again. Moving beyond the traditional antagonists and protagonists of theatrical narrative, Duegaw explores characters who simply “are”—existing outside the prefabricated, over-determined binaries of good and bad, transparent and oblique, and allowed instead to articulate a sense of place and belonging on their own terms. While modern artists, such as Picasso and Schwitters, used brokenness as a first critical step in casting better understandings of overly familiar material worlds, Duegaw constructs the totality of his characters upon a welcome foundation of panel gaps, uneasy joins, and conspicuous absences. In this exhibition, ruptures and divisions are not necessarily the inevitable consequence of living badly, but of living deliberately and completely--the building of true identity often marked by unapologetically obvious misnavigations: the use of the wrong tool for the job at hand. While Duegaw's works sometimes construct building as a seamless exercise where all pieces of a rudderless, do-it-yourself world come together without resistance or complaint, other paintings on show are the visual aftermaths of pounding tacks with a sledgehammer--a representational idiom that rises from intricately considered layers of failures, misunderstandings, false starts, unrecognizable triumphs, and unspoken convictions. While postmodernism celebrates the unanswered/unanswerable question or the flux between states of visibility and invisibility, Duegaw relishes the play inherent in these often-contradictory conditions. His work fashions the builder as one who equally cherishes the half-finished, completed, and ruined plan, and allows the experience of viewing to serve as both foil and complement to the processes of (un)successful construction. In the end, Duegaw transforms the static artwork into a multi-dimensional presence that remains responsive to the ever-changing conditions and situations of contemporary culture. To see photographs of the exhibition and read the catalogue, please visit The Builder, Removed.